Istria on my mind 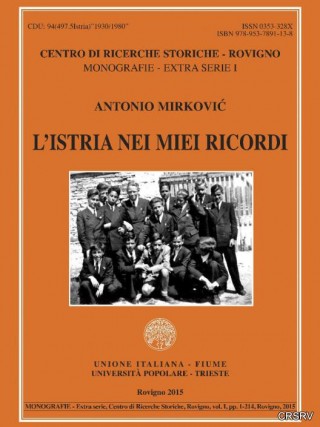 On Friday 24th June, in the crowded room of the Community of Italian in Pisino (Pazin) the book by Dr. Antonio Mirković “Istria on my mind” was presented; book published by the Historical Research centre of Rovinj, in co-publication with the Popular University of Trieste and the Italian Union. The volume, printed in 300 copies already sold out; is part of the “Monographs – Extra Series I” and it collects the autobiographical stories of this 87 years-old compatriot doctor, who for decades has been collaborating with the CRSR (Historical Research Centre of Rovinj). During the event, in order to expose to the audience the different aspects, that make this book a great value work for the whole Italian National Community, spoke Gracijela Paulović, president of the local CI (Italian Community) and Giovanni Radossi, director of the CRSR, Maurizio Tremul, President of the Executive Board of the UI (Italian Union), and Fabrizio Somma, president of the UPT (Popular University of Trieste). The evening continued with the performance of the mixed chorus “Roženice”. Then the author presented his last volume, a result of many years of work and a selection of events not written in the history books. Finally the “Roženice” choir sang again.
We report here almost entirely the preface by professor Corrado Ghiraldo, who was Mirković’s patient and then friend.
Antonio Mirković was born on June 6th, 1929 in Pola. He attended primary schools in Pisino (Pazin) as well as high school (Ginnasio and Liceo), but the Italian High School of Pazin closed in 1946. So, in September of that same year he enrolled in the newly established Italian Gymnasium of Rovinj, directed by professor Antonio Borme. In the Autumn of 1949 he enrolled in the Medicine Department at the University of Zagabria  (Zagreb) where he graduated in 1957, at the new branch Department of Medicine of Zagreb in Fiume (Rijeka).
After having finished his training at the Civil Hospital of Pola (Pula), he went to practice his job at the medical Dispensary of Pisino. After two years working at the Health District of this town, he continued his activity at the Pula Health House where in 1988 he ended his mission as a doctor. In Pula he was a member of the Italian Circle of Culture (Community of Italian people) of the town for a long period; he was director of the cultural division; during this time he promoted the publication of the journal “El Clivo”, a media outlet which had the task of involving the largest number of compatriots in the awareness of their peculiar historical and cultural characteristics, because they are integral part of the ancient presence of the Romance civilization in the Istrian land. For many years he has given several  lectures, accompanied by historical-landscape slideshows about the Istrian region in many centers of the Italian Community of the area, including Quarnero (Kvarner). From time to time he collaborated with the magazine “Panorama” of the Fiume Edition. In 1983 he took part in the Istria Nobilissima competition with the essay : “ Valle d’Istria nicknames [..]. In 2005 a contribution of him was published in  the “Acts” (Vol.XXV) of the Historical Research Center of Rovigno (Rovinj) about the Youth games of the valley with the title “A Games Collection of the Istrian Valley”
In the sixties he actively helped to the reopening of the Italian school in Sissano where, while he was in Pola for working, he went twice a week to practise his medical profession.During the nineties he was member of the town council of Pola and at the same time he was also part of the vocational school’s  Executive Board of the town. SInce 2005 he has been a member of    the Public Health Institute of the Istrian Region. On 12th April 2013 the General Consul of Italy in Fiume, Renato Cianfarani, gave to Doctor Antonio Mirković the honor of the Knight of  the Order of the Star of Italy, by decree of the President of the Italian Republic Giorgio Napolitano. “ For over 50 years Doctor Antonio Mirković has carried out an uninterrupted activity for promotion of Italian culture and support to the local Italian communities. In addition with his disinterested professional dedication, given for 40 years as family doctor, he has ensured continuous and prompt medical assistance to many compatriots. Doctor Mirković has always shown a great disposition to dialogue and he has always been ready to help the Italian families and for this reason he is esteemed and trusted by our compatriots” says the motivation that completes the award.
The opportunity and the occasion of living and working in different locations of the Istrian peninsula for years offered him the chance to know on the ground the true soul of the people of this land. By the means of these pages the author wanted to describe, without judging or magnifying , the sequence of the elements that helped to spread the ancestral traditions of the local people settled in the Istrian peninsula, and their particular nature, open to tolerance. A tolerance, however, not always approved by those who did not completely understand the inner mood of the Istrian people.  To reach his aim Doctor  Mirković reported the events he has experienced on his skin when he was still a child and then a young doctor, and episodes lived and described by others in the same places he had visited while he was exercising his profession/mission. The collection of single pieces of regional “history” we find in this work becomes memory free of partisan interference and therefore useful and meaningful to deepen the knowledge of an environment, become, after many centuries and overlapping of events, the melting pot of Istrian people.