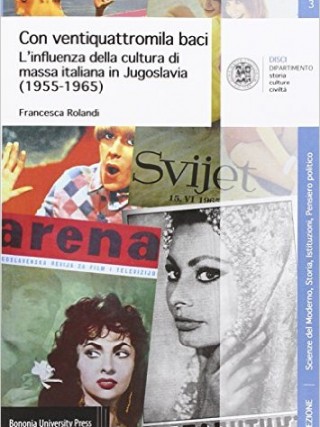 On the evening of 16th June at the book Cafè “Dnevni boravak” in Fiume the book by Francesca Rolandi  “Con ventiquattromila baci. The influence of Italian Mass Culture in Yugoslavia (1955-1965)(Bononia University Press, Bologna 2015, pages 195,  25,00 euro)was presented. Together with the author have spoken Carla Konta, Andrea Roknić Bežanić and Vanni D’Alessio, all members of the Philosophy Department of the University of Fiume. The idea of the volume is that the temporary arrangement of the border dispute, happened with the Memorandum of London in 1954, became the prelude for a flourishing of cultural relationships between Italy and Yugoslavia, characterised by two different political systems and so far separated by a tough territorial fight. The influence of Italian Mass Culture in the neighbouring country established a filter that allowed the transition of cultural phenomena having a Western origin, already adapted to a context that makes them less controversial and more acceptable for the Yugoslavian authorities. The increasing contacts, particularly possible thanks to the opening of the border, helped in a crucial way to the formation of a Yugoslavian mass culture, especially in a decade (1955-1965) of great openness for the socialist Yugoslavia. So Festival of Sanremo, Adriano Celentano and Rita Pavone’s songs, the coproductions, the shows broadcast on Rai and then resumed by the rising local television, together with the popular practice of buying goods in Trieste, permit to the Yugoslavian audience to become familiar with Italy, until a sense of cultural affinity was built even with some difficulties. An image of Italy in their mind that has little to do with the real one, but that reflects the expectations that the Yugoslavian people had for their future and that they temporarily imagined beyond the border. Francesca Rolandi obtained a PhD in Slavistic at the University of Turin with a thesis on the influence of the Italian mass culture in Yugoslavia. In 2014 she was awarded with the prize“Vinka Kitarović”.Today she is research associate at the History Department at the University of Fiume.