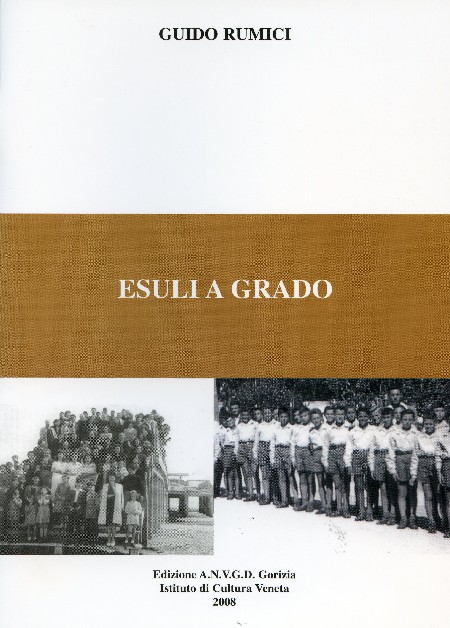 The events on the Eastern Italian border during the Second World War and the immediate post-war period have returned to the spotlight of the national public opinion.
The exile of the population from Istria, Fiume (Rijeka) and Dalmatia has been remembered in different ways by the major mass media and new works have been added to the several publications already existing.
There are still some grey areas linked for the most to peculiar aspects of the Julian-Dalmatian facts and, particularly, to the arrival of the refugees in the host areas.
The island of Grado, at the extreme Western end of Venezia Giulia, was chosen for different reasons, either for the geographical closeness with refugees’ places of origin, or for the shared affiliation to that Julian and Venetian world in which Adriatic people have always identified.
This brief work aims to give a first input to the arrival of the refugees to Grado and to their subsequent integration in the local social fabric. The purpose is to add a further element to the large and  multifaceted patchwork of the Julian events during the ‘40s and the ‘50s, events that have changed a whole region.

Guido Rumici (1959) is a professor of Business Economy and publicist. Scholar of EU law and of International Organization at the University of Genova. Researcher of History and regional economy, he is author of several articles and essays about the history of Venezia Julia and Dalmatia. He won in 1998 the seventh edition of the Carbonetti Award with his writing “Istria 50 years after the great exodus” and in 2001 the Tanzella Award with “Italian school in Istria”.
In 2001 he published with Mursia “Brothers of Istria” where he has defined the story, the condition and the opportunities of the Italian of Istria, Fiume and Dalmatia from 1945 to the present days. In 2002, again with Mursia he published “Infoibati (people who died in the foibe. The names, the places, the witnesses, the documents” where he has reconstructed the whole story of the massacres occurred on the Eastern Italian border during World War II and in the post-war period, considering also many documents, often unpublished, coming from Yugoslavia, England and Italy.

In 2005 the book “A village in the storm: Pedena 1943/1948”, a work focused on the German occupation and the post-war period in a place of the inland Istria. In 2006 he published “Stories of deportation”, a collection of witnesses given by survivors to the Yugoslavian prisons.

Previous
Exiles in Fossalon
Next
Exodus