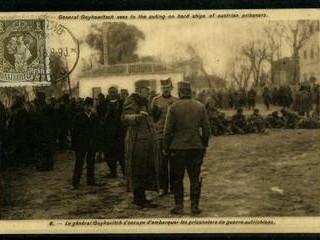 From Belgrade to the coasts of Albania, until ending in Asinara where 7,000 of them died of disease and privation in the first three months from their arrival. This unknown story of thousands Austro-Hungarian prisoners, captured in Serbia and then transferred to Italy during World War I. A review.
This forgotten story from a forgotten battlefront of World War I comes from the fascinating book by the Italian historian Luca Gorgolini. Through a detailed yet wide-range analysis he gives voice to the odyssey of a group of Austro-Hungarian soldiers, captured in the Balkans and later deported to Asinara, a little island opposite to the Sardinian north western coast. Let’s start from the beginning.

Autumn 1915. From the north the German and Austro-Hungarian army and from the east the Bulgarian one, that has just entered the war, launch a ferocious offensive against Serbia which is finally occupied. At the beginning of the Great War the previous attempts of aggression had failed and had seen the capture of a wide number of soldiers. According to some estimates at the end of 1914 there were over 60,000 German and Austro-Hungarian prisoners: an impressive number for a small nation like Serbia even in normal conditions. After six months of conflict these numbers were really dramatic, because the uninterrupted war effort and the progressive isolation of Belgrade had by now exhausted the whole country. Right from the beginning the prison camps were inadequate to accept such a large number of soldiers and the resources to find alternative solutions became as time went by even scarcer. Epidemics of typhus, cholera and dysentery quickly decimated the prisoners and were added to episodes of mistreatment and violence, robberies and starving, hard works in civil and military works.
Then the invasion and the retreat. When Belgrade was occupied in October 1915, the Serbian Government, army and population were put to flight. Eyewitnesses spoke of this “great retreat” as a humanitarian catastrophe and so did the subsequent literature. It was the tragedy of a flood of people forced to suddenly leave their homes, to pile up along muddy and often impassable streets with their poor stuff; of a frightened and confused humanity, desperately striving to find a first refuge in neighbouring Montenegro and Albania. Even the German and Austro-Hungarian soldiers were obliged to join the march to avoid that, after an appropriate period of rest, they could return in the ranks of the respective armies. So the prisoners, already exhausted by the epidemics, were dragged into the getaway and submitted to exhausting marches and to any kind of privations. Many of them died during the retreat due to starvation, cold and disease. The survivors reached the Albanian shores after many sufferings.

But their odyssey wasn’t finished yet. When the armies of the Central Empires began to go towards Montenegro and Albania’s boundaries, the evacuation of the refugees became urgent. The Italian, French and English Navies organized the transport of the Serbian  civilians and soldiers and the whole Belgrade Government to the South, to the Greek islands, mostly to Corfu.The prisoners instead were a problem for the international community: they had to be transferred as soon as possible but Italy and France were competing for the leadership over the operation. Italy aimed to have a leading role in the Balkans finally won and it got the right to manage the emergency; unfortunately it was completely unprepared to grant the right assistance to the prisoners.
In Mid December 1915 began the transferring of the first group of soldiers to Asinara, where an isolation centre for contagious patients had already been set up in 1885. It was evident to Italian authorities that the prisoners were a sanitary emergency first of all. Considering that the most of them exhibited clear symptoms of cholera, according to the original plans the prisoners had to be examined before boarding and later to be transferred in small groups to Asinara; the building on the island could host a thousand patients at once. After the necessary disinfection procedures and a period of quarantine, the treated and restored to health prisoners would finally be sent to other camps in Italy, allowing the arrival to Asinara of another group of soldiers. But the situation in the Balkans quickly crashed as well as the sanitary conditions of the prisoners crowded on Valona/Vlore pier with a high risk of epidemic. The evacuation could no longer be postponed. Omitting all the required medical procedures, between 16th and 30th December 1915, 21,388 prisoners were transferred using 10 steamers to Asinara; other 2,618 soldiers were transported between 2nd January and 8th March 1916.
Within 8 weeks 24,000 men landed on the small island near the Sardinian coast. It is probably enough to underline this number to imagine the following, tragic course of the events. More than 1,500 men, already affected by the epidemic in Valona, died during the sea travel or aboard the steamers forced to stop for long in the harbor, because the lack of the necessary structures, equipment and medical staff slowed down the landing operations.
The boats’ narrow spaces, the travel’s hardship and above all the precarious hygienic conditions offered the ideal condition for the spread of the diseases, cholera especially, so much that the steamships’ captains were forced to abandon the corpses on the open sea. Cholera epidemic, however, did not give a break even on the mainland: from 7th January to 14th January 1916 more than 1,300 prisoners died.On the island the conditions were tragic: a constant shortage of water and supplies made the winter unbearable for the Austro-Hungarian soldiers; despite they were ill, they were redistribute in the camp tents. In addition to all this it is not to forget the aforementioned lack of medical supplies and staff. All these factors contributed to what we can today define a real massacre: 7,000 died in the first three months.
This tragic story is now faithfully narrated in the book by the historian Luca Gorgolini entitled The damned of Asinara,published by UTET in 2011, 179 pages (German translation by Günther Gerlach: Kriegsgefangenschaft auf Asinara, Innsbruck 2012; the translation will be soon available in Serbian too: Проклети   са   Азинаре, Prometej, Novi Sad, 2014). A careful and meticulous research but not limited to the description of the historical context and the reconstruction of the odyssey of these soldiers within the broader and more complex topic of imprisonment during the Great War, aspects that nevertheless give an important contribution to the work; he manages to convey in a meaningful way the human story of the protagonists.The wide range of sources used and above all the valorization of the autobiographical testimonies collected in the diaries and in the private documents of the prisoners ( in particular the Czech soldier Josef Šrámek or the Austrian Josef Robinau) allows the author to outline, in the last chapters of the book, the hell into which these men were dragged. For the reader, and before for the Austro-Hungarian prisoners, Asinara became like a Dantesque circle: a city of tent, of makeshift shelters where men exhausted by hunger, thirst and physical (cholera especially)  and psychological diseases ( attention is paid to episodes of mental disorder and depression among the prisoners), but also a field of conflict and rivalry among the different ethnic and national groups, of mere struggle for existence.
And at the same time, even in this full of desperate men, Grigolini does not forget signs of human everyday life and sharing: the attempts to deceive the hollow waiting creating field journals,satirical in addition, or dedicating to the correspondence with their distant relatives.
To make it short this study has many merits and it witnesses the invaluable importance of a fair historical research to reconstruct the single pieces of the complex mosaic of World War I, also and above all in those fronts still today considered having minor importance.

Previous
Istrian folklore
Next
Andreotti and italy on the border