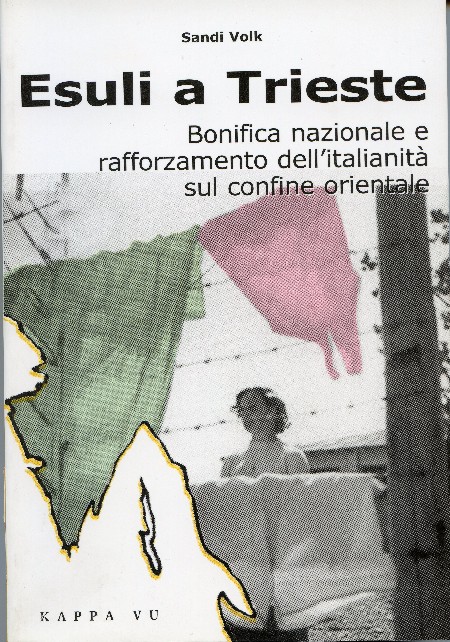 The topic of this book is the settlement in Trieste and its surroundings of the exiles/refugees who, after World  War II, abandoned Istria and Dalmatia. The settlement of the refugees took place in several stages and, for the line-up supporting  the Italian cause in Trieste and for the Italian Government, it was at first an instrument to reinforce the groups encouraging Italy, then the system to “rationally reorganise” and to “reinforce the Italianity” of a land where the wide part of the population, and not only because there was a substantial Slovenian minority, looked trustfully at Italy.
The targeted settlement of the refugees was one of the primary projects for the Italian Government and it has been pursued and completed with resolution. The author, analysing a big amount of documents, describes the different steps and the consequences on the social and ethnic fabric of the Eastern border’s lands.

Sandi (Alessandro) Volk is born in Trieste in 1959, he graduated in modern history at the Literature and Philosophy Department at the University of Trieste and his relator was Professor Elio Apih.
He took the master’s degree and doctorate in modern History at the History Department of the Faculty of Philosophy at the University of Lubjana (SLO). He works on modern History of Venezia Julia, focusing particularly on Trieste and on the history of the Slovenian people of this area. He conducted a research about the rise of the Slovenian working-class movement in Trieste, the Slovenian National movement before World War I, about World War II and the memory of Slovenian in Trieste, the story of the Nazi concentration camp of Risiera of San Sabba, about the memories of the period 1918-1954 in different groups of Trieste citizens and above all about the destiny of Istrian and Dalmatian exiles/refugees after the exodus, which was also the subject of his master’s degree and doctorate thesis. He publishes his works in Slovenia and in Italy. In addition to several essays and articles, both in Italian and Slovenian, about the Istrian and Dalmatian refugees problem, he has already published two works.

Previous
Exodus
Next
Herbs and Herbalists