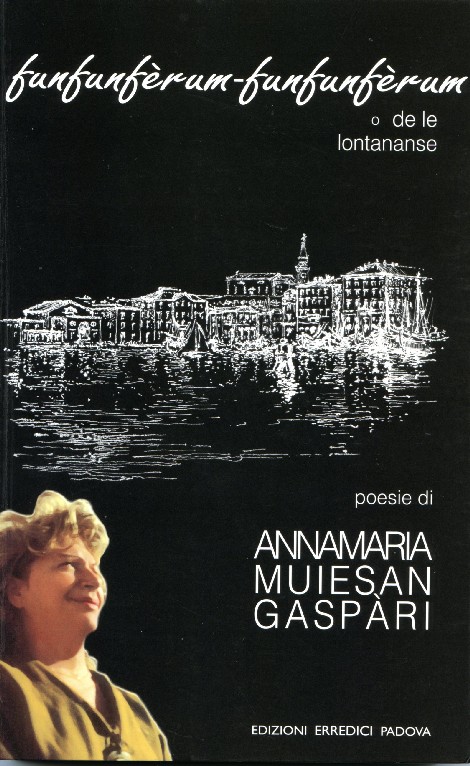 Funfunfèrum-funfunfèrum is like a game made of bitter dreams, a neverending identification, as much as is never ending life with a crime in history. It lays under a permanent dirty cloth, apparently not washable. If bitterness generates poetry more than a fixed love, the collection we are going to discover doesn’t show hitches in the poet’s path.
It’s the life on a stage of the memory of the tragedy of a little girl, which is the murder of a whole nation. It’s the rising of the time which does no justice both for its passing by and for its unhappy conclusion. A child keeps in his mind every moment, every way of his childhood, and this memory reaches his heart. A lot of this comes back in a hardly stoppable stream, moving on in life. Returns have the word of those perfumes. The thought is encoding in this way and its expression is dialect.
Annamaria Muiesan Gaspàri ends fifteen years of meditations giving to the reader, near to the tenderness of memory, the clean use of the Piranese dialect, that is going to lose in continuous modifications. Here, like in the other Istrian languages, more desperately than elsewhere. Not only for the universality of the normal evolution of society: also for the particular development of our history.
The Regional Institute for the Istrian-Fiuman- Dalmatian Culture (I.R.C.I.), in its daily work of conservation,protection and diffusion of every cultural trait of the lost lands, gladly provides his patronage to Muiesan gaspàri’s  work: it is an award to the poet’s feeling but, also, and more, for us , the gratitude to the philologist.
(from I.R.C.I. introduction- Director Piero Delbello)

Annamaria Muiesan Gaspàri was born in Pirano from parents of a very ancient Piranese strain. Refugee from 1945, she lives in Trieste. She has published three collections of poems in Piranese dialect Bièchi………..She is included in some collective publications of poetry and narrative, among them….Calliope cara….. Her novels and poems have been featured in newspapers, magazines and anthologies. She has got several awards :….
In November 1998 she has published Via Vico Predonzani 666.

Previous
Fragments of a lesson
Next
Florilegio Chersino anthology of Cres (partly for joke, partly for not to forget)